As Christmas approaches, the minds of all conservative political junkies move to visions of a Republican taking the oath of office on January 20th, 2013. And with the New Hampshire primary just 13 months away, it’s time to start the Presidential beauty contest. To those who love the art of politics, one of the biggest questions looming over the 2012 race is can a fat guy with a southern drawl win the presidency?  Behind that question sits one of the most formidable contenders in the Republican field, Mississippi Governor Haley Barbour. 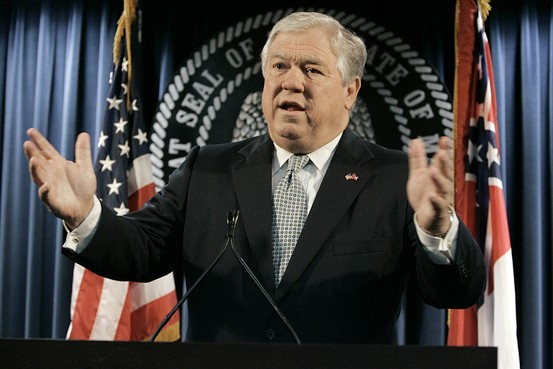 His resume is may be the most impressive of the expansive field of GOP contenders in 2012. After serving as a political aid in the Ronald Reagan and George H.W. Bush White Houses, Barbour was the chairman of the Republican National Committee from 1993 to 1997, the period that saw GOP majorities take control of congress for the first time in more than half a century. His sense of politics may be as keen as any conservative in the country.

As Governor of Mississippi since 2004 he has validated his conservative bona fides’ with an impressive record in a state which faced many challenges. In the wake of the devastation of Hurricane Karina, the incompetence of the state and local response in Louisiana was in stark contrast to the disciplined and effective reaction by Barbour in Mississippi. His crisis leadership was again demonstrated this past year during the Gulf Oil Spill. Barbour, along with his Republican counterpart in Louisiana Bobby Jindal, demonstrated competence and strength of leadership that was sadly missing from the national response. After assuming the Chairmanship of the Republican Governors Association in 2009, he led the GOP to gains at the state level (and a pocket full of GOP IOU’s for Barbour) that may overshadow even the gains made in the house.

If Governor Barbour were to be the Republican nominee, the left will attack him for his years in Washington and work as a lobbyist. He would bring no geographic advantage to the ticket; Mississippi is safely a red state. However, Barbour is as solid a conservative as any in the race and when combined with this national republican leadership, his ability to unite the GOP coalition is unmatched.

Barbour brings one thing to the 2012 race in quantities unmatched by other contenders, competent leadership. Barak Obama came to the presidency 4 years out of the Illinois state senate and was propelled by a media who were enthralled with the idea of electing the first black president. Since becoming president, Obama has abdicated the defining of his agenda to the Democrats on Capitol Hill, his foreign Policy to his Secretaries of State and Defense and focused on reading speeches twice a day from the white house teleprompter. Two years of on the job training seem to have been lost on this White House. We live in very challenging times, dangerous times and what America needs is competent leadership. With this one issue a republican can win the White House and realize those visions of a republican taking the oath of office on January 20, 2013.

Yet the question remains, will voters pass over the photogenic Ken dolls, the give good speech crowd or the fools who live in the echo chamber? Haley Barbour will be mocked by the liberal elite on GEDNC (truth in ownership of MSNBC), his record trashed by the HuffyPost. There will be further proof that liberal compassion and political correctness ends at the doors of their own meeting halls. Yet after the emptiness of the preceding 4 years, the voters in 2012 may well be willing to actually do what they profess to desire, elect a president of strength and substance. While it is too early to be making picks or endorsements, Haley Barbour may be a man whose time is at hand.