If one needs any further proof that the GOP grassroots are not thrilled with the current crop of candidates for the 2012 presidential nomination, a new CNN poll released last night illustrated it in Technicolor. Two of the top three contenders are not even announced candidates, and many of those who are buried deep in the pack. The deeper you dig into the poll the more troubling it is for the current announced candidates. Yet the big surprise is the leader with 16 percent support when asked who they favor, likely GOP primary voters picked former New York Mayor Rudy Giuliani followed by Mitt Romney with 15 percent, well within the poll’s margin of error. Sarah Palin was in third place with 13 percent and Ron Paul in fourth with 12. The remainder of the field is fractured with none of the announced candidates gaining traction. 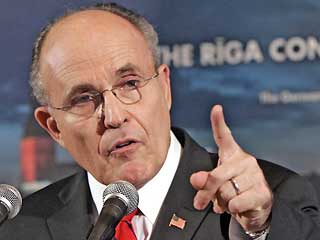 But the presence of Rudy Giuliani at the top is startling in two fundamental ways. Giuliani had a disappointing performance in 2008 where he entered the race as a frontrunner and proceeded to run a campaign which won only one delegate to the convention. His campaign, if you can call it that, this time around has been almost stealth like and surprisingly low profile for the former Mayor who loves the spot light. None the less he has been campaigning and focusing on the early states where he may in fact show a great deal of strength, However more surprising is that while so many have suggested that party conservatives are disappointed with the choices, the leader is a candidate who is often viewed as a moderate.

Most in New York would not call Rudy Giuliani a moderate, but to many social conservatives that is exactly what he is. He is also the real deal. Unlike certain other candidates who have seen many (and in some cases most) of their positions evolve based on who they are speaking to, Rudy is Rudy. His standing as a fiscal conservative is unquestioned and his record of fiscal responsibility and control as Mayor of the largest city in the country is impeccable. He inherited a city with a crime rate that left many uncomfortable on the streets and left as Mayor of the safest large city in the world. That Giuliani would defend and protect the homeland if elected mayor is without doubt.

It is his social moderation that has raised many doubts among conservatives. However he in fact personifies one of the core principals of conservatism, that decisions should be made by communities as close to the governed and not by national governments. True conservatives opposed federal activism and support strict constructionist views of the constitution and Giuliani has advocated that since his days as Associate Attorney General in the first term of the Reagan Administration. Combined with the fact he is simply a genuinely strong leader, Giuliani is much more appealing to many conservatives than the left leaning media would like to think.

This poll makes one thing clear, this race is very much open and the president’s polls continue to show he will be very beatable in 2012. But the time for those on the side line to sit and watch and ponder is running out. There is a fine line between plotting a strategic entrance into the race, and doing a sad impersonation of Hamlet.