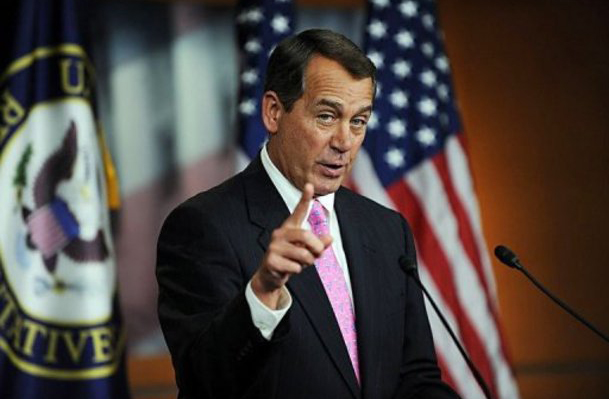 I must admit that for much of the last decade I have had little faith in the Republican leadership in the House of Representatives. It was that group who during the bush years lost touch with the basic principles of restrained government and fiscal responsibility which had defined Republicans for much of the last 50 years since Barry Goldwater redefined what it was to be a Conservative Republican. The American People did not forget and in 2006 and 2008 sent a clear message of disapproval. Fortunately the Democrats misread the message badly and in 2010 the voters gave them a good old fashioned butt kicking. Yet with the new Republican majority in power one question remained; would the new House leadership really have the courage of their convictions t maintain the course, and the political skill and strength to execute. Today it seems the republican leadership under Speaker John Boehner may just be the team t take on the liberal expansionists in the Obama administration and their tax and spend agenda.

Some of the vocal protesters on the extreme right howled in outrage when Speaker Boehner agreed to the budget deal that prevented a government shutdown a month ago. Just as important he prevented a repeat of the 1995 shutdown which the Democrats and their friends in the media used with great effect against Newt Gingrich. However in making that deal Boehner not only extracted billions more in cuts than anyone realistically expected, he changed to debate in Washington to not what new spending programs the Leftists could pass, to a singular focus on where to cut spending. Even President Obama offered an anemic and ill conceived deficit cutting plan. This change in the debate is big stuff! Rep Paul Ryan has offered the first comprehensive plan to realistically take on the looming debt crisis and while this plan is unlikely to be enacted as presented, it is the starting point for the debate. If the House Republican Conference maintains its resolve they can reign in the Obama spending machine.

Yesterday in his speech to the Economic Club of New York, Speaker Boehner laid out a strategy which is likely to result in a sea-change in the direction of Washington’s spending practices. For decades the debt limit has been raised with nothing but the token speeches from members outraged at the level of the debt before they immediately pass the increase in the ceiling. However, by linking the increase in the ceiling to “trillions” of dollars of cuts in spending, Boehner has set up a confrontation with President Obama which is very different. While failure to pass a budget can result is the draconian scene of a government shutdown, failing to raise the debt ceiling would force the President to make choices as to which parts of the government to close. Since the president would continue to have tax revenues to cover approximately 62 percent of government spending, critical services would continue uninterrupted. For the first time we would be focused on what we really can fund within our means. While these kinds of confrontations are no way to run a government, it is an effective means of holding the Obama Administration to debt cutting targets. The lower the incremental increase in the debt ceiling, the more frequent the opportunity to verify the effects. This is a means for the Republicans to define and control the debate, not to be the boogieman for the Leftists and their friends in the media.

The key to this is the ability of House Republicans to hold the line and communicate their message to the American people in an effectively and with resolve. For the first time in a decade I am optimistic that in Speaker John Boehner we have a leader who can effectively manage the Washington power structure yet still remain true to our principles and values. At the same time those of us on the right need to be supportive of this effort and leave the circular firing squads to the Leftists. The debt is the fight of this generation and the economic future of America rests on our ability to rein in spending and restore fiscal discipline to the federal government. With John Boehner’s speech it seems the fight has been joined. Now we must hold the line.