I may be showing my age, but this year’s Republican primary for President has some of the feel of 1988. After 8 years of Ronald Reagan, then destined to go down in history as one of the greats, many people were talking about the light Republican field. Conservatives loved Rep Jack Kemp, but while he was every bit as conservative as Ronald Reagan and a first rate policy guy, Kemp had none of The Gripper’s communication ability. Bob Dole was the tried presence as Senate Majority/Minoriry Leader and 12 years after being Gerald Ford’s vice presidential running mate. But the presumptive front runner was Ronald Reagan’s Vice President George H. W. Bush. At the time he was running on the premise of a third Reagan term and a no new taxes pledge which would eventually lead us to read his lips. And there was the problem. While he had been a loyal and effective Vice President to Ronald Reagan, many conservatives had doubts. Only 8 years earlier as a candidate for President in 1980 he has been solidly pro choice and famously called Reagan’s tax cutting policies “Voodoo economics” Then in July of 1980 when selected in the midst of the Detroit convention to be Reagan’s running mate a great conversion occurred, Bush said he supported Reagan’s platform, and thus had become pro life and a tax cutter. Late in the primaries Bush had tried to convince the press that he, like Reagan had “the vision thing”. Well if he wasn’t born with it he adopted Reagan’s and they were an amazing pair. But in 1988 with Reagan stepping aside many conservatives wondered if Bush’s conversion was real. Bush went on to win the nomination, at the convention in New Orleans the nation read his lips and the no new taxes pledge helped to win Bush the presidency. 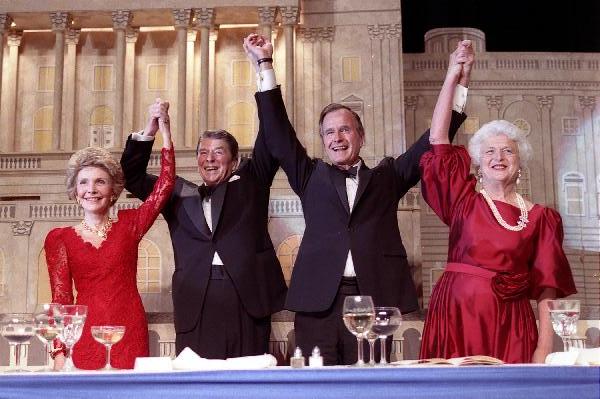 But that was where the question of Vision becomes complicated. Those of us who are old enough to actually remember the Reagan administration recall how the media labeled Reagan an ideologue. Conservatives like George Will called upon the outsiders like David Gergan, then White House Communications Director who were advising moderation of Reagan’s “risky” and “untested” economic plans to “Let Reagan be Reagan”. Well, that wasn’t necessary because Ronald Reagan was Ronald Reagan and didn’t need advisors or pundits to tell him what to do. See, George Bush got it right, Reagan had the Vision Thing. He knew why he had run to become President, what he stood for and that was the course the administration followed. Advisors like Gergan left the administration before the first term was over fretting how the President didn’t listen to their advice. They forgot that ideology is in fact a compass which if you truly have will keep you from ever getting lost. Sure there were bumps on the road; the 1982/83 recession was actually one hell of a pot hole. But today history rates Ronald Reagan among the great presidents. Unfortunately in 1990 in an effort to cut a budget deal with the Democrats George Bush traded away his no new taxes pledge for spending cuts the left never delivered. In that move, he sealed his fate as a one term president. But in fact that fate was defined years before because while George Bush was an amazing administrative President (the execution of the Gulf War was brilliant), he has no core ideology to tell him to just say no to the democrats in that smoke filled room.

This all brings us to 2012 and for those of us who are truly uncommitted and still looking for a candidate to support; the quest for the Vision Thing is proving difficult. Let me state up front I was a supporter of John McCain in 2000 and 2008 and I am convinced he had the Vision Thing, but that is another discussion. In 2008 I labeled Mitt Romney a Flip Flopper and wondered if it were something in the water in Massachusetts in the wake of John Kerry’s 2004 campaign. While I dismissed Mitt as a rich opportunist who was jumping from a single term as governor to the presidential big league on the back of his fortune. However after he lost and McCain secured the nomination, Mitt was a loyal soldier during the campaign even after being passed over for Vice President. In the years that have followed I have watched Romney perform well on the national stage as we approached the 2012 campaign. Given the economic crisis and the massive structural challenges we face in reforming government finances, Romney should be the presumptive nominee and a prohibitive front runner.

Which brings us to yesterday and the speech Romney made to explain why Romneycare is different from Obamacare. His answer was logical and the best he could have made, states are different and there should be no federal national mandate and he simply did what was in the interest of the people of Massachusetts. But as I was watching the speech I thought to myself while Romney is a very good communicator, somehow I could not imagine Ronald Reagan trying to thread the needle as Romney was. That is because it never would have happened. Reagan had the Vision Thing and that rigid ideological side the press and pundits complained about would never have let him support such an expansion of government as governor. He would have vetoed it if it had been passed, regardless of what the odds of his veto being sustained by the legislature. Oh Reagan was skilled at compromise, something many on the right today conveniently forget, but there were lines he didn’t cross because of that Vision Thing. In 1994 Romney was pro choice when running against Ted Kennedy for Senate, but by 2006 as he left the Governor’s mansion he had reconsidered his views and was now prolife. Now, I have no problem with thoughtful people reconsidering their positions over time in light of new evidence. To do that is healthy. But at your core there should be a compass which is used to evaluate the directions you take. It was that compass that lead Reagan to say no to Gorbachev at Reikjavik in 1996 when offered the opportunity to trade away virtually all nuclear weapons in exchange for the Strategic Defense Initiative all in the course of a few hours.

So the quest for the Vision Thing continues in 2012 with uncertain results. Has Romney really found it with maturity? Will Mitch Daniels or Tim Pawlenty be able to effectively communicate theirs? What exactly is Mike Huckabee’s ideology on things such as taxes? If we get it right, we will have a leader able to take on the significant challenges the nation faces. If not, it may be déjà vu all over again.